I've recently been getting my hands on with Open Policy Agent to find a way to gain a fine-grained permission control feature for my custom API service.

In this post I'm assuming you have at least heard what Open Policy Agent is. If you haven't, I definitely recommend watching the following presentations from Torin Sandal.

OPA is extremely powerful and flexible. You should take a look at some of the tutorials in the official docs starting from the, well, "Get Started".

One tutorial I found very interesting is the HTTP API Authorization. I think many people have experienced API Authorization and have struggled all the if statements to allow or deny a user doing something. With OPA, you can delegate the decision outside of your code.

"Delegate the decision outside?", at first, this was hard for me to imagine so I've decided to migrate an API from a non-OPA version to an OPA version.

You can look at the full code in the repository.

The API we are going to use is based on the tutorial in the OPA official docs. The tutorial uses python but I've decided to build it with Go and with labstack's echo framework.

Here is the overview of the application (including the policies).

Here is an overview diagram. 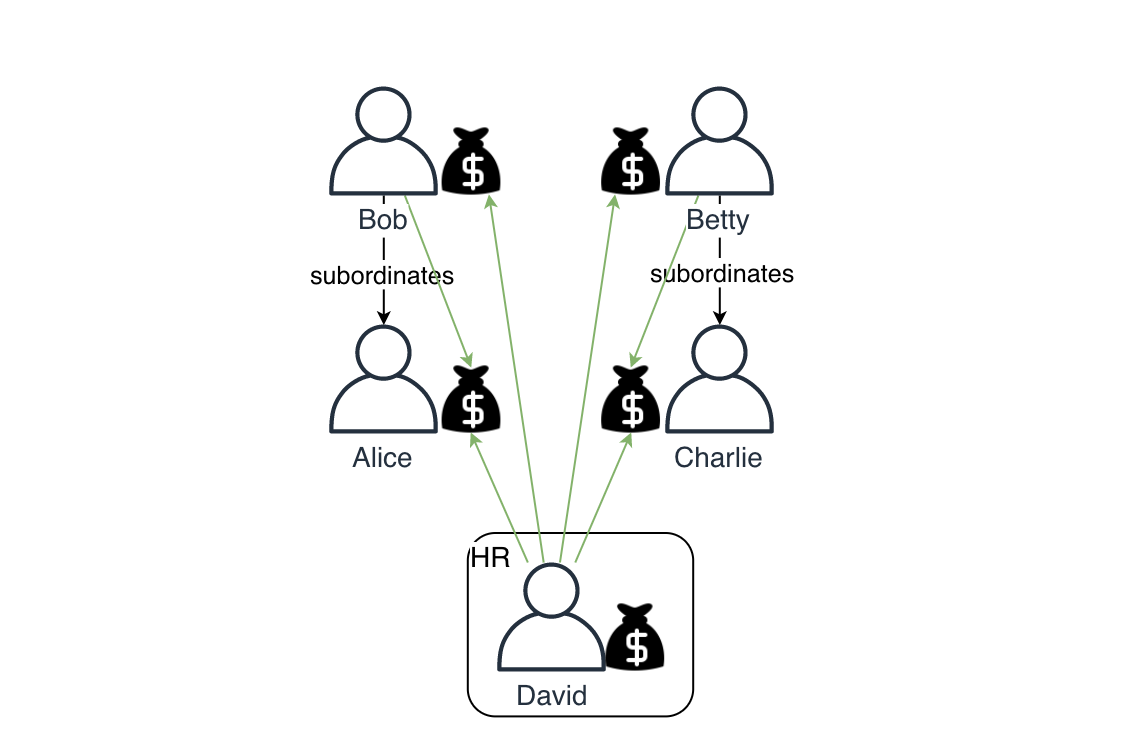 Let's get started with the non-OPA version.

I've created a Policy Enforcement middleware to enforce the policy on every request made to the API endpoint. In the middleware, I'm simply asking a PolicyGateway to check if the requester is allowed to call the API. The code below shows the overview.(GitHub)

The interface for PolicyGateway is just 1 method Ask which returns a bool meaning Allow or Deny.

I've called the implementation for the gateway the PolicyLocalGateway and basically the following code is what it does.(GitHub.

You can see lots of if statements and can assume this will easily increase the amount of code in the long run. Also, it is a little hard to understand what is going on with all these if statements and indentation (well... that might be my fault, but you get the point).

Let's check some HTTP requests to see what happens.

First, let's start with Alice. Since Alice is a normal staff, she can only view her own salary.

You can see that the value 100 came back with no errors. Let's see if Alice can view Bob's salary.

It is now forbidden because Alice is a normal staff and cannot view other employee's salary. The logs show the request has been denied as well.

On the other hand, let's see if Bob can view Alice's salary.

He has alice as his subordinate which means he is Alice's manager.

You can confirm that Bob is allowed to view Alice's salary. This is checked in the logic gw.checkIfSubordinate in the code above. Now how about Bob viewing David's salary?

Of course, Bob is not allowed to view David's salary because he has no permission to do so.

Now, let's see what David as a member of HR can do?

David's JWT payload is as follows.

Since he is a member of HR, he has hr: true in his JWT payload.

Success! And he can also see Betty, Alice, Charlie's salary as well. This is because he passes the check gw.checkIfHR in the code above.

This should have been pretty straight forward. Now, let's see what happens when OPA comes into the game.

Adding OPA is pretty simple. The implementation of the PolicyGateway will change. I've called it the PolicyOpaGateway and this time, I didn't implement anything related to policy rules (none of those if statements anymore) because I wanted to delegate them to OPA.

The main changes are:

It is nearly identical with the tutorial version. A slight difference is that it is verifying the JWT token with io.jwt.decode_verify using the key secret .

Side Note: The Rego Playground

One awesome feature I want to point out about OPA is the Rego Playground. 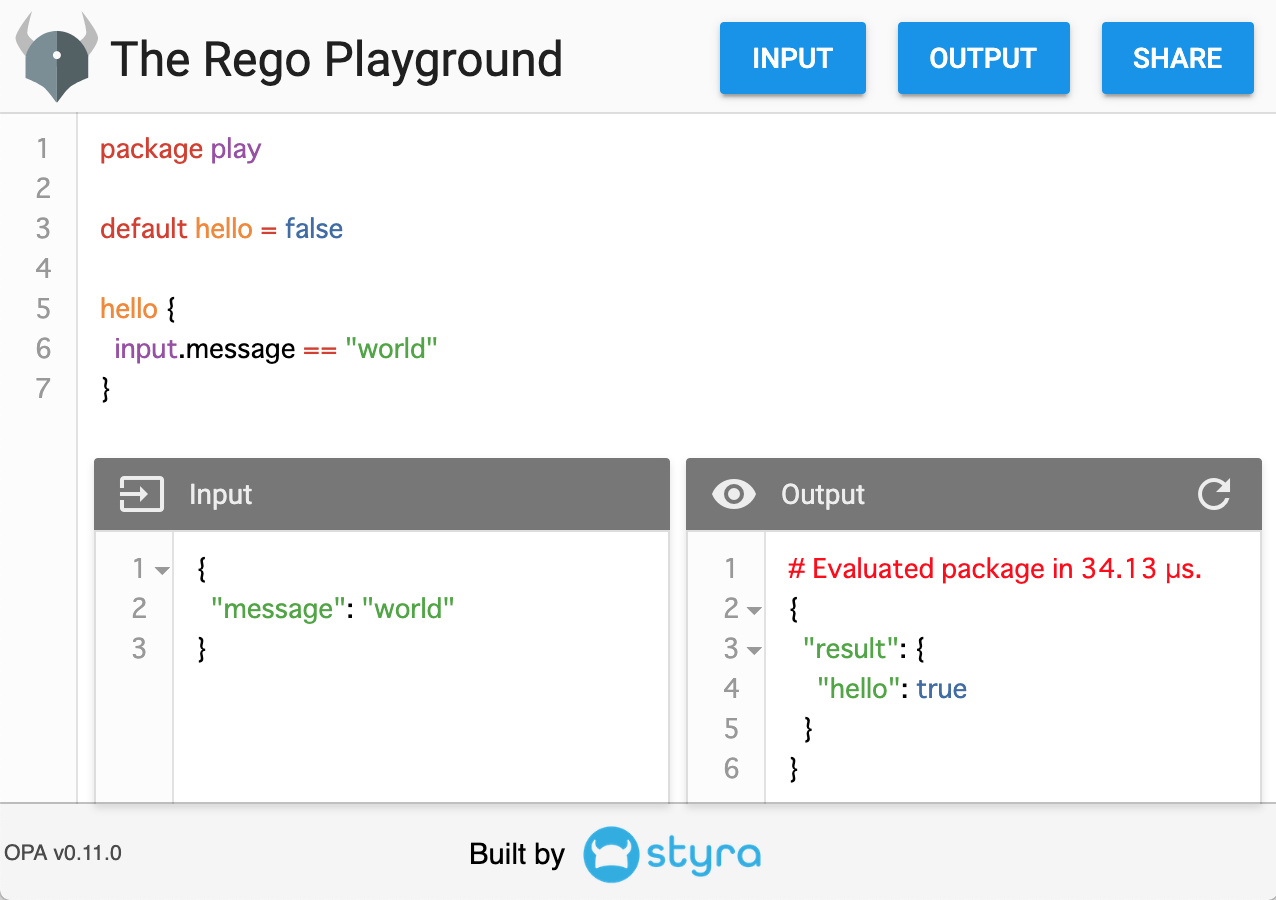 You can write policies and quickly evaluate them on the browser! In addition, you can share the policy via a link for others to look at (e.g. they can debug your policies). Here's the link for the policy above. The Input is set to Alice's JWT and the path to her own salary.

You can check the OUTPUT to see that the result is allowed.

After creating a policy with Rego, I've set the OPA service next to the main app by adding the following lines in the docker-compose.yml.

FYI, PDP stands for Policy Decision Point. I just wanted to give it a generic name.

Now that OPA is ready, I have implemented the PolicyGateway so it makes an external HTTP request to OPA server for decisions.

OPA needs enough information in order to make decisions. For this simple app, I needed to tell OPA:

And the code looks like this. I have used echo's JWT middleware to easily extract the JWT data.

A slight gotcha is that the HTTP request payload needs to be wrapped with an input key as shown in the code above. Of course, this is mentioned in the docs.

I have injected OPA's endpoint to the PolicyGateway through an environment variable (here and here). Therefore, it is accessible by calling gw.endpoint . So the request will be like the following code.(GitHub)

It's simply asking OPA and returning the result back to the caller. Now that the code is prepared, let's give it a shot again!

The app is requesting OPA and receiving true as the result. You can see the same result in the following playground.

Let's also see if Alice's request to Bob (to her manager) will fail.

Awesome! And the logs?

Everything is working as expected! (Here's the playground)

We have successfully replaced the local policy engine to OPA. You can see how the separation of concerns are met by delegating the policy decisions to OPA.

You can view the full changes to the code in my PR here.

This was a very simple example to show how you can leverage the power of OPA with an HTTP API server.

Some Pros and Cons I can think of from this simple example is:

Pros Separation of concerns. In my main app, I can concentrate on the business logic I need to implement. I don't have to write all those if statements and change my code each time a policy changes. If I change my code, that means I have to deploy it again. As for OPA, you can dynamically change your policies on the run. No redeploying is necessary when you change policies.

In addition, I was not able to mention it in this post, but Rego can be tested with Rego, too. You should have a look at "How Do I Test Policies?".

Some additional Pros I've heard in the slack channel are as follows:

Cons I don't see a major downside in using OPA, but as this post has shown, a standard monolithic service turned into a microservice approach. Which means it will add complexity than not using OPA. But this is more about microservices than OPA itself. Also, Rego is an additional learning curve for newbies. I'd say it's worth the effort and I'm assuming Rego is going to become more and more popular as OPA grows.

Finally, some questions that may arise are:

Do I have to pass all information to OPA for decisions? AFAIK, the simplest approach is to pass everything, but that may not be easy or performant in many situations. One way is to use the http.send built-in function to make external request from within OPA. You can also use Bundles for OPA to fetch data periodically from external services. Further information can be found in the official docs "Guides: Identity and User Attributes". It has really good detail in it.

Can I create something like an AWS IAM with OPA? I have heard this question several times (including myself) in the OPA slack and if you have the same question, you should definitely look at the Chef Automate authorization service documentation. This document is amazing. I really mean it. There are definitely many ways to implement something like an AWS IAM with OPA but this one is surely a great live example.

I'm assuming there are many more questions, but the best way to get support is to join the OPA slack channel. The people there are super supportive and I've gained a lot of knowledge there.

Thank you for reading this long post!!! I'd like to greatly appreciate Ash(@ashtalk) and Tim(@tlhinrichs) for reviewing this post upfront! I'm hoping I can contribute and give back with what I have to the OPA community!